Album Review: Wreck of the Day by Anna Nalick 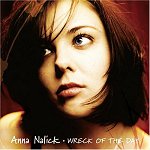