Album Review: Leave Me Out of This by Fiel Garvie 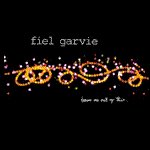