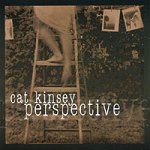 Cat Kinsey has been compared to many artists including Laura Nyro and Joni Mitchell but I would be remiss if I didn’t mention her uncanny similarity to Ani DiFranco…early Ani, before she went all funk and horns on us. Cat’s voice is not as much like Ani as her song structure and guitar playing are. But I think it’s OK to be similar to someone else especially if the “more famous” one is no longer doing the same thing…and if you are distinguishable from the others, and Cat Kinsey is.

She has put together an exceptional album of quirky, poetic, rhythmic, intelligent songs. I so admire someone who can write lyrics that are so clever and smart that I bang my head and say ‘Why can’t I express things like that’.

“Otherwise” has great guitar picking and has a nice flow to it. It is probably my favorites song on the CD. But then again, I also like “Naturally Ripened” which is a gutsy and jazzy song about pregnancy…and “Fireside” is just plain gorgeous. You know, I would be hard pressed to pick only one and then I’d just change my mind again.

This is a fabulous CD and I recommend it to anyone who is looking for some good intelligent folk-rock.