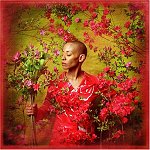 You probably know her even if you don’t think you do. If you’ve been to a concert in the last several years you’ve probably even seen her perform live. Gail Ann Dorsey has played with David Bowie, Dar Williams, Ani DiFranco and several others. She’s released a couple of solo albums previously, but this one could surely land her in the big time as a solo artist in her own right. Gail’s executive producer for this effort is Sara Lee (who also has played with those above mentioned women).

Her voice is smooth, sexy, jazzy and perfect for this type of music. This type being a combination of jazz and pop/rock. The songs are well written and beautifully performed.

This is a great CD for just relaxing with a glass of wine (or cup of tea, if you wish) and just chilling out. Could also be good for those um…romantic times.

The melodies are welcoming and homey feeling, even upon first listen. This is a gem of a CD and I’m so glad to see Gail Ann Dorsey stepping out from behind the shadows. Hers is a voice that needs to be heard.

Stand out songs: “Nether Land”, “This Time (Barely Alive)” (which has been in my head for three days). I really do listen to the whole CD, I just like the first two best.