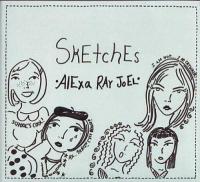 Normally when I review a new artist who is related to someone famous I try to downplay that aspect. But when the “someone famous” is one my musical gods I have to mention it.

I remember when Alexa Ray Joel was born. Seriously. I’ve been a fan of her father’s since I was a young’un. In fact, his album, The Stranger is the first one I ever bought with my own money. His music is precious to me and I don’t say that about many things let alone many artists.

Talent doesn’t always run in the family but I’m happy to say it does in the Joel clan. Her voice is lovely. It’s got a really unique sound. At times has quite a trill and it sounds fabulous singing these jazz tinged songs. Her piano playing is very influenced by her father’s. There are some passages that sound just like something he’d write. But she has also put her unique spin in her music.

Joel is also a great songwriter. I have to confess; on about the third spin of “The Revolution Song” I thought it must be a cover because it was so familiar. I think that’s the mark of a good song. One that sticks with you and you don’t even realizes it units it pops back out again when you least expect it. Or it sounds familiar early on. It means to me anyway, that it really got in there (‘there’ being my noggin).

I can’t wait to hear more from Alexa Ray Joel. I see a bright future in this biz for this talented young lady.

Track Listing
1. The Heart of Me
2. Now Its Gone
3. Don’t Let it Bring You Down
4. The Revolution Song
5. Resisitance Song
6. Song of Yesterday