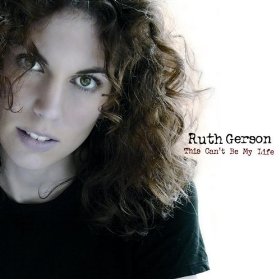 This Can’t Be My Life by Ruth Gerson is being released today!

The album opens up sound like she’s channeling Fiona Apple. Not the vocals so much, but the piano style. So obviously, piano-based pop. Just my thing.

It’s a cool record. I’m sorry if that sounds bland, but I the adjectives are just rolling off my tongue (fingers?) today.

The songs are interesting and filled with emotion and her voice is strong and powerful. It even straws into PJ Harvey territory on Black Water. 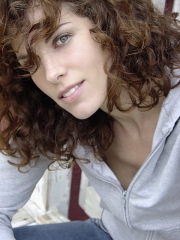 Singer-songwriter Ruth Gerson will release her latest album, “This Can’t Be My Life,” on July 20th, 2010 via Wrong Records, her first release for the label. Recorded by Nic Hard (The Bravery, Jesse Malin) with additional recording and mixing by Daniel Wise (Scissor Sisters, Secret Machines), Gerson says, “Writing the album got me from nowhere to somewhere and through the second hardest part of my life.” Originally ready for a summer 2007 release (the album was recorded, mastered and pressed), Gerson held back “This Can’t Be My Life,” because of her divorce and newly-single parenthood. Three years later, Gerson is ready to share “This Can’t Be My Life” with the world.

During the period she went off the road, Gerson went from teaching part-time to teaching full time (Gerson taught at Princeton University and founded “The New & Used Songwriters Collective” in NYC). In 2009 Ruth moved to the Bay Area, and founded San Francisco Vocal Coaching. Vocal coaching and producing other artists led her to develop the SingingbeltTM – Gerson is the creator of the first bio-feedback device that teaches singers diaphragmatic breath support (www.singingbelt.com). “The SingingbeltTM is the reason I can go back to playing,” she says. “It makes it possible to be a musician and support my family. I’m in the best place of my life now. I wrote ‘TCBML’ in the worst of places.”

In the title track, Gerson writes:

I made two lefts, I shoulda gone right / If I made one more left, it woulda been right / It can’t be, can’t be my life.

“You think change is hard, but change is easy compared to not changing,” she says. In “Fresh Air” (finished on a New Year’s Day) Gerson writes:

You killed me once, you killed me twice, third time you killed me / I started to want back my light… / Must of lost my head somewhere / Now I’m opening all the doors / Gonna make this year my very best year / You and your fresh air, should be happy together.

Away from touring and performing, Gerson focused on writing and recording and made an album produced by Rick Chertoff (Cyndi Lauper, Joan Osborne) and William Wittman, with guests Suzzy Roche, Byron Isaacs and Jack Rose (who passed away this past December), called “Deceived.” Scheduled for release in early 2011, “Deceived” is an album of songs – ranging from traditional folk and blues to seventies pop – about the bad things that happen to “bad” girls. “The goal with ‘Deceived’ is to raise awareness and funds for domestic violence organizations across the country. I grew up in a violent house. DV victims need a place to go to create a safe life with their children.” [Greil Marcus has already called the album “a triumph.”]

Press has been lavish with its praise for Gerson in the past. Jon Pareles of the New York Times wrote: “With a voice that rises from tender endearments to a bluesy, impassioned growl, Ruth Gerson sings folk-rock songs that reach for the status of anthems; she’s a Bob Dylan fan… who can be as galvanic as Bruce Springsteen.” The Village Voice lauded her “huge, flawless voice [which] makes her ideas sing, and every word is welded to the beat.” And CMJ put her in excellent company: “The closest modern comparison would probably be Sarah McLachlan, but Joni Mitchell really comes closer…Hear her now, or hear her later; either way you’ll hear her and you’ll be moved.” And an early review from the Palo Alto Daily News calls “This Can’t Be My Life” a “rock-pop masterpiece.”

← Something to do TONIGHT (online)
Happy Friday, have some free music. →