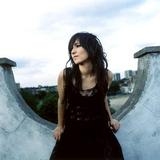 The show was a fairly enjoyable hour of music (no going overtime at Joe’s). Unfortunately the audience was almost entirely Joe’s Pub donors who were more interested in their calamari than the music. KT commented on the lack of audience reaction but was nonetheless cute and personable, giving us “free facts” with our tickets (e.g. cockroaches don’t die from decapitation, just from the hunger that produces; if you took all the space between molecules out of Earth, it’d be the size of an apple. A very heavy apple).

There was a percussionist, two backing singers (who also tinkled on a ‘rockinspiel’), and KT on her guitar. Her voice is pleasantly rough live, and her guitar playing nicely rhythmic, preventing things from getting too MOR. She did the cool self-sampling thing, playing ‘Black horse and a cherry tree’ in her patented solo way (eg YouTube). Lots of fun. KT has several catchy songs other than the singles, and the ballads were pretty. Suddenly I See was supposed to be the show topper but her guitar sound was huge and trebly for that song, spoiling her catchy ode to Patti Smith somewhat.

← Album Review: Breaking Free by Mya Rose
Finally one of “My Girls” on American Idol! →