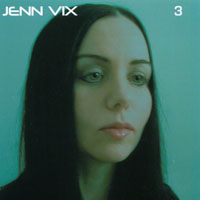 Jenn Vix’s third album shimmers in a mysterious haze. Her electronic-based music has a heart beneath its cold exterior. She plays and impressive array of instruments and sings sensually.

The appealing opener “Doll Heart” is moody and strong.

“Stuck” is sad and has gothic spiraling guitars. Vix’s singing is less melodramatic than the style requires and it makes her a stronger singer than most.

“Open Your Eyes” is relatively poppy. Vix’s vocals float atop an inventive instrumental backing. This is what Madonna”s “Frozen” might have sounded like if it had more inspiration.

“Wires and a Dream” has Vix looking into the relationship of humans and machines. “I want a chip implanted” she sings.

Elsewhere she performs a tribute to Toshiro Mifune and revisits an earlier song.

“3” is a great album and it’s well worth exploring.