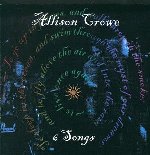 The first track on CD will not blow you away; in fact, you may not even be able to hear it very well. I’m not sure if this was intentional, but the sound is mixed so low that it’s almost inaudible.

The second track “Midnight” however, will blow you away. This song is as good as any Vanessa Carlton song and in fact reminds me a tad of her vocally. I guess that’s why it is on the CD twice, the second time being labeled, “the single”

The Allison takes it down to a more lyrical and flowing tone with “Crayon and Ink”. A beautiful song that showcases both her voice and her piano playing, both excellent.

This is a solid debut and a very good way to get attention in the music industry, which she seems to have happened since she’s been noticed by MTV Canada where she has appeared performing her song, “Crayon and Ink” in October 2002.