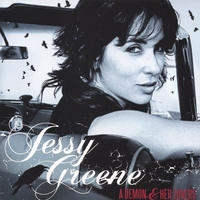 I have been aware of Jessy Greene for a long time. I believe I even saw her perform with REM once. I also think she’s local to Minneapolis. I was even more surprised to see this cd show up seeing as it came out 2 years ago. But I’m glad I gave it a listen.

I can’t get over the resemblance of some of these songs to Heather Nova. I can’t seem to place if it’s the songwriting, the voice, or the production. But while this has been on shuffle in my player for the last several months there have been many times I’ve said to myself, ‘who’s this, she sounds like Heather Nova.’ So there you have it.

However, I am having a hard time getting into these songs. They seem to just wash over me and before I know it the record is over and I realize I wasn’t paying attention.

That said, Runnin’ Outta Time is very cool. A little techno but starts out with pretty violin. Some rappish backup singing. I like this.

I like Odessa too. I like when she uses the violin I guess, but not as much otherwise.

You’re Breakin’ up Again is also good. Moody and electric and cool.

So some of it I like and some of it I am ambivalent about. I can’t strongly recommend it, but I don’t dislike it either.

← Album Review: An Evening Out of Town by Knitting by Twilight
‘Before the Goldrush’ Revisits Classic Singer-Songwriters to Benefit Teach For America →