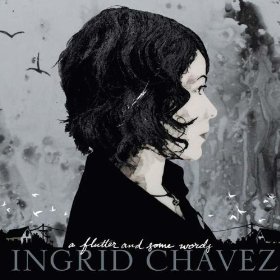 Ingrid Chavez was the artist who once made an album for Prince’s Paisley park label, then collaborated with David Sylvian who she was married to. A second album has been a long time coming but now it’s finally here.

Chavez’ intimate spoken-word lyrical style and strong songs are intact, and this collaboration with Lorenzo Scopelliti is just what the doctor ordered.

The title song is sensuous, and sees her doing her poetic whispery thing with relish. The backing is gorgeously evocative.

Back Roads continues the calm, yet urgent tone and sees Chavez at her most expressive, with a lovely backing.

she sings as if regretting it.

By the Water is more effortlessly sensuous yet restrained fare, with her singing of love by the water to a barely present backing.

No Goodbyes is a scene of farewell between a couple that’s very civil, set to a piano backing. Chavez as ever understates her emotions, but delivers with a great deal of weight.

Her album’s well worth investigating.