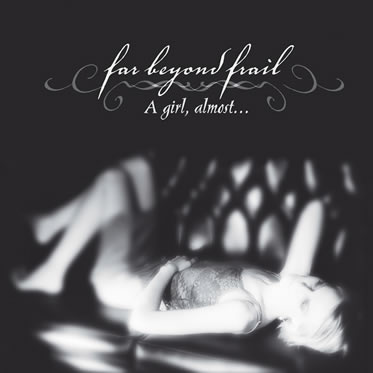 One thing that is interesting to me is the band name. Far Beyond Frail…does that mean strong? As in, ‘she’s anything but frail’? Or does it mean so so frail it’s just…beyond? Well, I don’t know that it matters. The band is not what I would call frail. Not at all.

The band is made up of Sharlynn Verner and David Cecil. The songs are all written by one or the other of them.

Verner’s voice is simply beautiful. The music is as well. Piano driven pop rock with a lovely ballad-y style ala Sarah McLachlan minus all the layered instrumentation. Especially on “Love Gets in the Way” These songs have depth, don’t get me wrong. It’s just that Far Beyond Frail’s music is not as epic as some others’ in this genre. It’s simpler in a sense, yet still very nice.

The lyrics are very emotional. The first phrase of “Run Away” is painfully touching…

“Stranger, you’re perfect
As far as I can tell;
Would you like to go somewhere
To forget how live can hurt like hell”

The production is first rate. The mixes are just right. The music is prominent but does not over power the vocals. The arrangements are great as well. This is a very classy record.

I do wish the album was a little longer, but it’s still a great choice.

Stand out songs: “I Think You Know by Now”, “Screaming on the Inside”…but really they’re all lovely.

Track Listing
Listen to track samples
1. I Think You Know by Now
2. This Time Love
3. Run Away
4. Ever Since You
5. Love Gets in the Way
6. Over Again
7. Screaming on the Inside