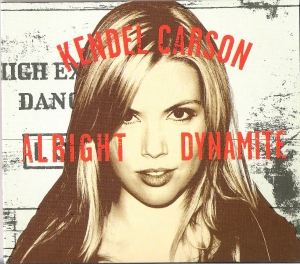 My first impression was that I didn’t like this. But that was hearing it on shuffle with the other 50 albums I’m currently listening to. I don’t know what the deal is because when I gave it the “one last chance” listen I ended up enjoying it quite a bit.

Opening track, Oh Baby Lie Down is nice, it’s kinda country, but has a good melody and is sweet. I like her voice. It’s strong and solid.

I also like Lady K, it’s memorable and quite pretty.

Belt Buckle is almost Chris Isaak-y. I can imagine his band doing this one. But it seems to be lacking a little bit of punch. Maybe live it would be better. But I still like it.

One Blue Dress on the Line is a waltz and I always find myself dawn to waltzes.

Ah, listening deeper into the record, now I see why I didn’t like it while it was shuffling…
Many of the songs on the last half of the record are more in the blues realm (Which I…um…*shudder*…). I can handle the stuff that’s country-ish, but when it starts to stray into blues that’s when it loses me.

New Shoes an example of what I mean. It’s a mixture of country and blues. Just add Christian in there and you’ve got my personal hell. But I know I’m in the minority here.

Mercedes Benz is, yes, that old chestnut. I didn’t like it the first time and haven’t any subsequent time either. I know, it’s a sacrilege, but it’s the truth.

Cowboy Boots and Mexico slow things down and get rid of the twang so they’re cool.

So I guess I like her slower songs, and I like the ones that aren’t too bluesy. Which just means that some of this stuff isn’t for me personally.

She’s talented and no doubt there are many who will find all the songs appealing. It’s just not for me as a whole package. But I do think she has a strong future with music lovers that can appreciate the genre more than I can. This is a case of “It’s not you, it’s me” and I mean it.