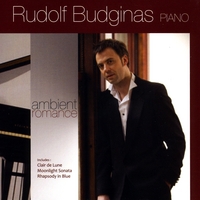 This is a record I’m not really qualified to comment on, since it’s classical piano albeit played in a modern style. But I’ll try anyway.

Rudolf Budginas is classically trained and he approaches various classical works by Bach and Beethoven as well as more recent fare like Gershwin.
He’s very skilled at his chosen instrument and the arrangements are well done.

He does a lovely Rhapsody in Blue by the aforementioned Gershwin and a spirited Satie.

He’s certainly worth hearing if you like hearing solo piano recordings.