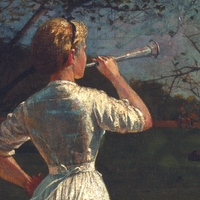 Knitting by Twilight is actually a musical collective. Their site says that it was created by John Orsi and Michael Watson as sort of an outlet for the music that didn’t exactly match the nature of the projects they were already working on. Interesting idea. So while it started out with these two, it’s an ever rotating line up.

This record is almost instrumental. There is a little bit of singing/vocalizing here, but not much. I guess I’d label it ‘ambient’, but it’s really more rhythmic than what, at least I, think of when thinking ‘ambient’.

These songs have lots of layers, and lots of things going on. It’s cool. The first track is called Jaunt to Dreamland and I’d say that’s a apt title. It actually sounds like a dream…if that makes any sense.

When there are vocals, they’re subtle and blend in nicely.

It’s perfect background music, good for working or relaxing. But it’s also good for slapping on the headphones (like those big GOOD headphones, not ear buds) and chilling. Very pretty.