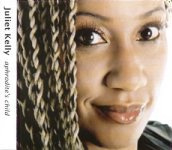 Review: In this era when many of the popular jazz singers like Diana Krall and Jane Monheit produce albums of covers it is is rare for a vocalist to look to create an identity and sound of her own by writing original material. British singer and songwriter, Juliet Kelly, should therefore be applauded for having the courage of her convictions, and offers an album filled with her own accessible and varied original compositions on this highly impressive debut.

She has assembled a fine trio who have grasped the essence of her tunes, and who provide a swinging, moody or subtly funky backing as in the case of the splendid Garden Of Eden. Tom Barlow is a rhythmic rock with a fine woody sound on the double bass (hear his solo on the beautiful Wait For Me), whilst drummer, Seb Rochford, who is currently causing quite a storm on the festival circuit with his band Polar Bear, shows why he was recently nominated in the Rising Star category for the BBC Jazz Awards. On piano we hear the excellent, Mike Gorman, who also recently released his debut album The Maze on 33 Records. However the star of this particular session is definitely Kelly, herself.

With a rich, warm tone, she easily negotiates the lyric at any tempo, imbuing it with an intensity of emotion that does not allow for indifference from the listener. Alive And Free is just that, a freewheeling melody that pulls the trio along in its wake, whilst on her excellent arrangement of Softly As In A Morning Sunrise she has the confidence and control at the slower tempo to be no less commanding. She also has the skill to pull off a slow and sultry version of Sade’s Your Love Is A King which is at least as good as the original and some might say, even better! Definitely a young lady to watch out for.