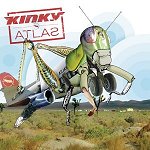 Their sound can be described as rock with a Latin flair. Half the songs are in English, the other half in Spanish. They are all pretty fun songs, though some of them seem to go on and on and don’t really do that much (“Do U Like It?” in particular). But those tunes would be great at a party or a club (since most club music goes nowhere, in my opinion).

“The Headphonist” is really cool and has Cake’s singer John McCrea doing the spoken-word part.

“Not Afraid” is also cool.

If you’re looking for something a little different and fun, give Kinky a shot.