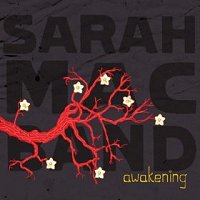 The Sarah Mac band is made up of three women and one lucky and/or brave man. They all have a wicked sense of humor if their bios are any indication. Their website has short bios of each band member, it has a little story about each person. Then under that it says “The Real Story” and a different, funnier bio is there. (i.e. “She was raised in the back woods of Montana by a family of derelict Koala bears”). Sounds like a fun group to hang out with.

Sarah McElhaney (lead singer) has a really nice, strong solid voice. It’s good for this genre…which is sort of bar-rock/bluesy pop. Their sound actually reminds me of some local bands I used to hear live years ago. Holiday Ranch in particular. (Man, I used to go see them a LOT…but I digress)

The melody and guitar part on Someone Else’s Sin is reminiscent of an old 90s band called the Katydids. Sort of lo-fi but cool.

Song for the Dixie Chicks intrigued me just by the title. I couldn’t really see what is had to do with the Dixie Chicks, other than it’s a tad more country flavored than most of their other stuff. But then I read the liner notes that say Sarah wrote it hoping they’d hear it, like it and record it. I can totally hear them performing it, but I like Sarah’s version very much. It’s a pretty song. It’s got a nice violin intro.

While the melodies are catchy and fun, the real star is Sarah’s voice. It’s not even all that unique, it’s just good, and sounds fantastic singing these songs. Maybe it’s partly that it’s mixed up front, so it’s easy to hear (and to tell what she’s singing lyrically). But whatever the reason, I like it.