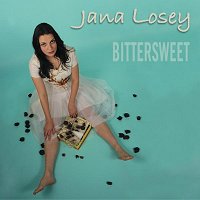 I feel bad saying this, but this record did not grab me right away. There was even a moment or two when it sounded like she was off key (toward the end of the first song). But there was enough about it that was likeable so I kept listening. Now I am really enjoying it.

Another thing that is bumming me out is I wrote a full review of this and somehow it disappeared when I switched to a new computer. Crap, I’m sure that review was brilliant…humor me.

I’m also enjoying her voice much more than upon first listen. I realize it really matches the songs well and where I thought she was out of tune was maybe just a note too low for her range. No biggie, she sounds great on the rest of it.

Losey has a theater background and I’d say that shows. There’s something very dramatic about her.

I like the lyrics on #5 “Messy little mood swing”

This is a short record, which is kind of too bad. I’d like to hear more from this talented songwriter.