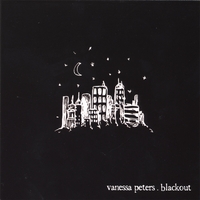 I’ve reviewed Vanessa Peters’ releases in the past and have always enjoyed her music.

She has a very soft, comforting voice (without it being wimpy at all) and her songs are equally soothing.

The production and tone of the record are subdued and understated, but professional nonetheless.

If you just listen to the songs casually, you’ll enjoy a nice acoustic record. If you listen closely and pay attention to the lyrics you’ll be rewarded with great stories and clever turns of phrase, such as “I’m so poor that I can’t even afford to pretend I’m fine…” (“Afford To Pretend”).

The record is a short 5 songs, so I won’t go into stand outs, they’re all good. If you like acoustic folky pop then I think you should give Vanessa Peters a listen. If you’re already a fan, you will not be disappointed. This is a very nice release. Word has it there will be another record yet this year. Looking forward to it!

Rating: 5 Stars
Comment: I give you 10!!!! more than fantastic Vanesina, you rocks, you really do!!! Thanks for share with us your beautiful voice and talent. I am your fun number one, from Costa Rica!!!!
name: Sue on Sunday, July 30, 2006