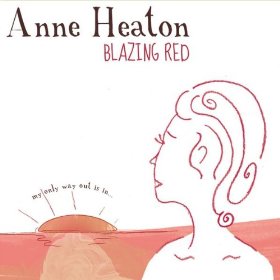 I’ve been following Anne Heaton’s career for years. I’ve also hosted her for Collected Sounds House Concert series, so it’s safe to say I am a fan.

She has a very unique voice with lots of charm and vibrato. It’s one of those things you’ll probably like or not. I do, trust me, but even I”ll admit at times it can be overdone. But 99% of the time it’s beautiful and adds a nice depth to the songs. Certainly makes her a unique artist. You hear that voice and you know it’s Anne Heaton.

Opening song, Jump is probably my favorite. It’s soothing and has a wonderful melody.

Pieces of Me is another stand out. There are some nice backing vocals.

I Know This is one of those songs I felt I knew by heart the first time I heard it. And I don’t think it’s because it sounds like something else, I think it’s just that well written and comfortable.

The peppy Only Way Out is In is a fun lively number.

The rest of the album is made up of lovely songs: well written, expertly performed and produced with class. Par for the course on a Heaton release. She never fails to impress.