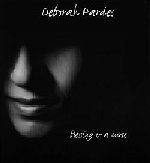 Deborah Pardes makes music with a soft sound, but the lyrics are biting and real. “7th Step” for instance takes its inspiration from Frank McCourt’s novel “Angela’s Ashes” and does it justice.

“Falwell Enough” is a response to Jerry Falwell’s speaking out against the Lilith Fair. “She wears a guitar and she wont shut up” sings Pardes.

She is also capable of tender love songs. The beauty of this album also lies in her expressive voice.

All told it’s an album that deserves exploration.

Ed.Note: You probably cannot. Thing is, most of the artists featured here are Independent. This means they are not signed to a major record label, which means that they don’t get radio play or MTV exposure. It’s all part of the nasty game of “the music industry”. I could go on a long rant, but I won’t. The fact that there are fabulous musicians out there but they don’t get exposure is the reason I put this site together in the first place. This is one of the few places you can go to find out about these artists. My advise? Buy this CD…buy copies of this CD and give them to all your friends. Ask your friends to do the same. Just because someone isn’t on MTV doesn’t mean we can’t get the word out to everyone about her. WE have to do this…because no one else will.