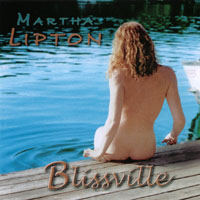 The CD cover does nothing in the way of depicting what you will find inside.

When I popped it into my computer and put on my headphones, the first thing I heard when the music came on is ‘oh god no, it’s Gloria Estefan and Jimmy Buffet’s love child’. The first song could be off one of many of Ms. Estefan’s 80s releases (hell, maybe she’s putting out the same music now, I wouldn’t know). But I think this recording came out about 18 years too late. It might have been quite popular in the mid 80s, but I’m having a hard time seeing it be a big seller today.

The second track redeemed this CD for me a tad. It’s a torchy piano/full band piece and Martha’s vocals are smoky and go well with the music. The trumpet interludes are cool as well. (I’ve been corrected, that is not trumpet, but is a sax!–whoops!). If only she wouldn’t do that talk/sing thing…it bothers me. But that’s not to say she’s not good at it, it just bugs me, it’s just an issue of personal taste. It shows up on a couple of songs.

As you can see…because she spells it out for you on the track listing, there are many styles of music on this disc.

“All Over You” (her Dixieland selection) is probably my favorite. It’s got the most style. The lo-fi recording makes it sound like we’re listening to it on an old Victrola. All the snaps and crackles are there along with her childlike Betty Boop voice. This is a fun song.

Other than that song, I think the best songs here are the Latin-tinged songs about fruit, drinks, sunsets and the ocean. These do kind of make me want a daiquiri. But it’s 8:30 am…oh well, it’s noon somewhere right?