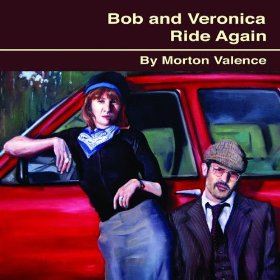 Morton Valence is centered round Anne Gilpin and Robert Hacker Jessett’s vocals.
They have made a concept album about a couple by the titular names. It’s an inspired concept and one that works fine.

Ordinary Pleasures is a sweet little song about just that, with an attention to detail that recalls the Kinks. The vocals appear to be made for each other just as they do elsewhere on this album.

Hang it on the Wall is a wistful song that allows Jessett’s vocals to the core in a nice way. It’s a little like a male fronted Black Box Recorder.

The album closes with Go to Sleep a fitting end that’s also a lullaby of some delicate charm. Gilpin’s vocal lulls us into security and the album’s ride is over.

Track Listing
1. Veronica’s challenge (continued)
2. Chandelier
3. Sequin smile
4. Ordinary pleasures
5. Funny peculiar
6. John Young
7. Hang it on the wall
8. Nobody understands
9. Falling down the stairs
10. Bob and Veronica and some chandeliers
11. “I must go” said Veronica “but I will always come back”
12. Disco
13. Go to sleep