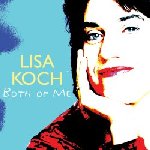 Lisa Koch is one of Seattle’s favorite performers. She’s well-known in the area for her sold-out holiday shows featuring Lisa Koch and Peggy Platt (together, they are Dos Fallopia). Lisa’s unique blend of comedy, music and talent have often been compared to Bette Midler.

In this latest release, Koch displays her depth of skills through both serious and funny songs. The first seven cuts are sensuous, sultry, engaging songs about love and life. The opening cut, ‘Home to Me’, is a tune about her partner’s eccentricities. With a pop/samba feel, this song sets the tone for the rest of this well-crafted CD. If you weren’t convinced by the middle of the first cut, the second cut will slam the door shut on any doubt you may have. In ‘When I Look in Your Eyes’,a blend of funk/soul/pop, Koch delivers a soft, seductive tune perfect for a romantic evening. The remaining ‘serious’ songs all showcase Koch’s immense musical talents and diverse style. It’s hard to put her music in a category, but you’ll find each song is reminiscent of some artist you know well. You’ll find yourself humming or singing these songs long after the CD has stopped.

Koch is accompanied by some of Seattle’s most talented musicians and is joined by special guests Laura Love and Barbara Higbie. If you’re a Barbara Higbie fan (ok, I am a major fan!), you’ll recognize the piano work on a couple of tunes as distinctly and awesomely Higbie.

The comedy pieces, tracks 8 through 12, are brilliant. The first one, ‘Gravity Blues’, pokes fun at our own aging processes. ‘Devil’s Washboard’ (featuring Peggy Platt) is one of the funniest songs I’ve ever heard. If you’ve ever attended a women’s music festival (and actually, even if you haven’t), ‘I Won’t Survive (The Festival) is a wonderful parody of a reluctant attendee of women’s music festival. I laughed out loud at some of the lines in this song (this is right up there with ‘world’s funniest song’).