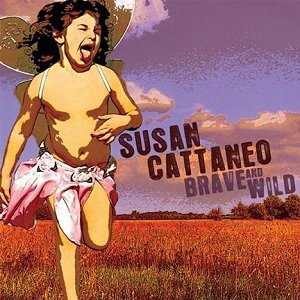 My first several impressions of this record were: “I don’t like the bluesy aspect to this.” In fact, I’d written a whole paragraph about how I don’t like blues, it went a little something like this:

Some of you I know (Hi Anne!) love blues and you will love this record, I predict. I wish I could wrap by head around the genre, but it feels like every fiber in my body dislikes it because sometimes if something is too bluesy I actually feel ill when I’m listening and it’s a relief when I turn it off. What do you think that is? Sheesh!

So when I was getting serious about thinning the stack of reviewables, I almost took it out of the running, but then I looked back on what I’d written before and saw that I had made notes like “reminds me of Edie” so I was stumped. Was I confusing two albums with each other?

Upon further investigation, I realized that my stupid WinAmp seemed to love one song, Wrecking Ball; which I don’t care for and which upon all my “bluesy” comments were based. It liked it so much that it kept playing that one over and over, more than any others. So it was likely just that I kept hearing that same song, going “who is this? I don’t like it” and it was always her. What I didn’t realize is that it was always that same song. Which reminds me of another similar incident***

So I deleted that track and gave the record another shot. And I’m glad I did.

The other songs, while having a little bit of a bluesy take are more of a Bonnie Raitt vibe, which I can always get behind.

Just Want to Know that I Mattered, and Suddenly are especially Raitt-ish.

Took Away my Sky has a pretty piano intro so of course I’m going like it. It’s a beautiful and sad (…make that heart-wrenching) song.

“You gave me wings, then took away my sky.”

I also like Get Back the Longing which is a duet with Mark Erelli. It’s more country, but I still find it appealing. He has a great voice and it sounds good with hers. I can imagine this one on the radio.

Wild Irish Moon is probably my favorite. It really show that she really has a lovely voice (this is the song in which she reminded me of Edie Carey.)

While for me this is a record where I can absolutely find songs I like, I can’t say the whole thing as a package is for me personally. But I know many of you will find it just right.

***One day I bought Brenda Weiler’s first album. I brought it home and put it in the CD player, hit shuffle and went to work in the kitchen making dinner. It was just background music. My husband came home and as we were sitting there in the kitchen he said, “Who is this?” I said, “It’s Brenda Weiler, she’s from here, do you like it?” and he said, “It’s really repetitive.” I hadn’t noticed, I’d been busy cooking. It wasn’t until about three more songs that I realized I’d not hit shuffle, but repeat. It was playing track one over and over again.

Track Listing
1. Wrecking Ball
2. Lay Your Heart On Me
3. Love Takes What It Takes
4. Get Back The Longing feat. Mark Erelli
5. Just Want To Know That It Mattered
6. Wild Irish Moon
7. Can’t Chase A Train
8. Suddenly
9. Took Away My Sky
10. Red Light Kiss
11. Whiskey Into Tears