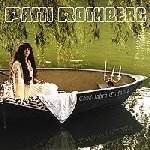 “I want there to be something for everyone in my music. When people ask me what kind of music I write and play, I don’t seem to be able to categorize it any better than I can categorize myself.”
Patti Rothberg
from D’Addario web site.

Though I never heard Patti Rothberg’s first release, “Between the 1 and the 9” in its entirety, I remember the single, “Inside”. I thought she sounded like a child with the sniffles and I really wanted her to blow her nose. So when her new CD, “Candelabra Cadabra” arrived in my mailbox from her record company, this was all I could think of. I have to say I was pleasantly surprised. This is a really good album!

Patti’s voice has only the tiniest bit of a “stuffy nose” quality and sounds more mature. She also rocks out much more than I expected. Especially on track “Moonage Daydream”. Since I only have the promo copy, I don’t have the CD artwork and lyrics (I don’t know if they are included in the retail copy or not). That said, I haven’t really delved into the lyrics much (I’m a read-along kind of gal) but the music is quite interesting.

Stand out tracks for me include:
“Candelabra Cadabra” – Great melody and sweeping, dynamic music.
“Shadows of Me” – Good harmonies, kind of a waltzy, pub song you can swing your pint of beer to. (across the United states…)
“Dish it Out” – kind of an F-you song in the style of Joan Jett and those eighties grrrl rockers.
“The Late Late Show” – Nice catchy love song. Much more mellow than the others.
“The Wry It Girl” – Steel guitar, country-ish waltz.

Though I wouldn’t really compare Rothberg’s music to anyone else’s, I’d say that those who like aggressive girl rock in the vein of Liz Phair will like this a lot. This is a CD best played LOUD!