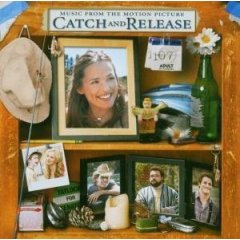 First off, I was so excited about this movie. I adore Jennifer Garner (even though she is married to my Movie Star Boyfriend). But then it came out and got horrid reviews. I still have not seen it, but will get it on NetFlix just as soon as it’s out (I rarely go to movies anymore since I have a theater in my home). But anyway….

The soundtrack is great! There are some names I was already familiar with (Foo Fighers, Lemonheads, Gomez, Joshua Radin, Death Cab…, and Paul Westerberg) but there are some new ones as well, and they’re really good.

I especially like Peter Maclaggen’s “Leaving the Ground”. It’s got that sweet pop sound with harmonies and a real easy style.

Of course Joshua Radin makes me melt and his contribution, “What If You” is no exception. We all miss Elliot Smith, but Radin will do nicely in his place.

I am also grooving on The Swallows, I will have to check out more on them.

This is a really nice pop record that will no doubt convince you to buy records by many of these artists if you haven’t already. Most of the songs are very similar. Mellow, sweet pop songs. Which is cool, but a little more variety would have been welcome too.

The only other thing I would have liked to see is some female artists. This seems to be a movie geared toward women (I did NOT say Chick Flick, because I don’t think it is one) so it seems odd to me that there aren’t any women present on the record. But it’s still pretty good.

Update: Saw the movie, it was pretty awful!