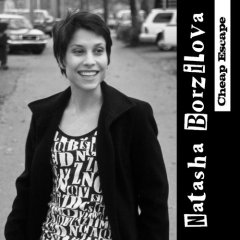 Natasha Borzilova was the lead singer and acoustic guitarist of the band Bering Strait. Her website describes them as “a group of classically trained child prodigies in the late 1980’s.”(sic) I was not familiar with them, other than knowing there was a band by that name. But most of the stuff I’ve read says they were country/bluegrass.

I’d say this record is more folk-pop, but you certainly can hear some of those influences here.

The title track, Cheap Escape is more folksy in nature and has nice backing vocals.

Don’t Stop has some great piano work, and it really rocks out!

This is a strong album, and I like it, but I think I would also like to hear her do more rock flavored stuff, her voice suits it.

[Natasha Borzilova Official Site]
I feel like I am having eye seizures after reading her website for 5 minutes. All that white text on black background! So I didn’t get through the entire entertaining list of fun facts on the site.