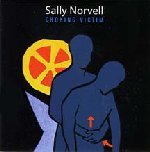 Sally Norvell has a long musical history. She was, amongst other things, in Congo Norvell who made cinematic torch songs. Her solo debut is sparse, but emotional and cabaret-tinged. Paul Wallfisch accompanies her on piano and Norvell sings her own and others’ songs splendidly.

“Blake in the Cake” is an elegant song with gorgeously vampy singing by Norvell. The mordant lyrcis are worthy of Jill Tracy.

The delicate pop of “One Gentle Thing” is lovely as well.

Sally Norvell is a fabulous artist and “Choking Victim” is a good place to start if you’ve never heard her before.

Rating: 5 Stars
Comment: I have to admit I haven’t heard the cd yet. However, I was a huge fan of Sally’s since the days of The Gator Family in Austin, Tx. in the early 80’s. She did the best cover of the 13th Floor Elevators “You’re Gonna Miss Me” since Roky did it himself.
By Mike Malena on Tuesday, October 4, 2005

Comment: Listen to it all the time wish she was still in New York. Never was more impressed.
pablo on Friday, July 23, 2004