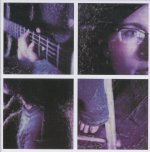 This is another review where I feel I have to comment on the promotional aspect, such as the website and press info, as well as the music.

This CD didn’t come to me with much information. Just the CD and a business card with no address or phone on it, just an email address that was written in a font that made it difficult to read. I went to the website that belonged to that email address (and it wasn’t as simple as “laurayalor.com” but that was probably already taken) and there was no website there.

Then I realized that I was reading a lower case L as a capital I and when I went the correct one I found the site. But it is not finished and clicking on any of the links does nothing. The info there was sparse and there was no purchase info except for an email address. This is always kind of frustrating to me but I muddled through. I’m sure the site will come together in time. Too bad it doesn’t correlate with the release of the CD. **

I almost stuck it in the “not very serious” pile, but I’m glad I actually ended up listening to the CD because it’s very nice.

Taylor has a soft soothing voice that is very well suited to this type of music which is guitar driven contemporary-pop. It’s nothing terribly ground-breaking, but I can see it having mass appeal. She’s talented, no doubt about it.

The opening song, “Going” is instantly likeable and upon second listen it sounded like an old hit to my ears. It’s a very sing-along-able song especially when the lyrics are a bit predictable. This is not a bad thing, I just like to be challenged more, that’s all. But pop hits tend to be written this way so it’s perfect for radio.

She blends piano and guitar nicely. In fact the instrumentation on each song is really very professional and nicely arranged. Not only is she talented herself, but she’s surrounded herself with some really good musicians.

**Note: as of October 2008, the website is going through a ‘facelift’ A Google search on artist and album name brings up nothing but this site.**