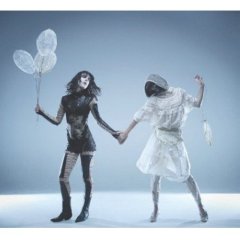 Their Montreal base immediately suggests that this duo is going to be out-there, eccentric and hopefully illuminating. Largely, they do not disappoint, as Dandelion Wind Opaine and Szam Findlay mingle sounds that Suzi Dent would struggle to locate in any dictionary in the world. Still their meaning is clear from the snappy, provocative delivery. The pair pluck hairs from an impressive range of genres, using the amplifying oomph of Arcade Fire, the tempting femme provocation of Salt N’ Peppa and the oomph and pizzazz of CSS . ‘Flooded Hairs’, pounds up the beats to make this empirical two troupe, perfect bedfellows for many acts currently featured in the NU-Rave craze. ‘Balloon Factory’ and ‘2010’, in particular, take the frenetic touch paper of The Horrors and lights it with the lurid and prodding touch of New Young Club.

A colourful appearance sees this quality seeping into the haughty stance of their mish-mashed offerings. Don’t be fooled by the colourful glam persona and the body shaking bass and beats, the lyrics are not just a token consideration. They read, at times, as though Tony Benn has been asked to write a song for Chicks On Speed. A prime example being the Bush slating, anti-war shriek of ‘Slumlord’;

“You can justify the attacks just because you’ve got some token blacks.”

A rustically pinging The Rezillos kick propels the beat fevered ‘Apotemnophilia’ (meaning the desire to amputate one or more parts of the body, apparently!), to shove the number to the industrial brink. A philistine fire of The Prodigy’s instrumental range brings out a higher, more rhythmic vocal approach from the untameable vixen of Dandi Wind. As the momentum builds through this fourteen track parade, the combination of beats, bass drive, percussion pounds and oblique vocals shows why cyber-Goth, is climbing the popularity ladder. ‘Kindergarten Cop’ captures the energy and off-kilter kick that this sub-stratum of the Goth genre embodies.

Dandi Wind’s biggest achievement with this UK debut album is in the way that the biting insight of the lyrics, stirs a fire in the vocal performance of Dandilion Wind Opaine to sit nicely upon the feisty and thrusting accompaniments. From Montreal with eccentric bite and a universal touch that could, if the label handles this daring duo correctly, make an impact the world over.