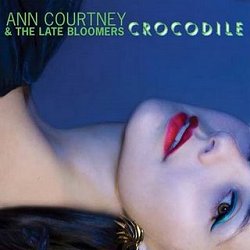 Album Name: Crocodile
Artist: Ann Courtney and the Late Bloomers
Year/Label: 2009 / Cougar
Not on CDBaby as of today, but if it goes on there, my guess is you’ll find it [here]
[Buy at Amazon]

Ann Courtney and her band have made a propulsive, energetic debut album.

Courtney’s vocal is full of strength on the stunning opener Perfect Medicine. She has enough energy to power a small nuclear plant as she howls about a bad man.

Don’t Be a Fading Bruise charmingly uses the title to create a strong pop song with an enchanting vocal. It’s somewhat reminiscent of Belly in their prime.

Strong Arm is a slower, more haunting but no less intense song. Courtney’s vocals are as strong as ever, and the band supports her well.

It’s an incredibly strong debut this.

God, I think I was expecting jazz music based on my first brief glance of the cover so color me surprised when out of my speakers came something almost punkish. Sort of a PJ Harvey vibe with lot of crashing rock cymbals and gutsy vocals.

Now that I take a good look at the record I realize I wasn’t looking very carefully. Sometimes that’s a good thing. That way I don’t form solid opinions before even hearing.

This is what I’d call melodic rock. Not that rock isn’t generally melodic, but this is more…ummm, interesting, spooky, swooping but still with the wailing guitars, frenetic drums (on some songs) and strong vocals.

I really like Don’t be a Fading Bruise. It’s got a very catchy melody and fun rhythm.

I also like Nice & Quiet. I like how they play with the rhythm, it’s one way for a bit then switches midsong. It’s a cool trick. This tune also shows Ann’s voice well.

Down for the Winter actually is pretty mellow and very cool also.

The songs are well written and well performed and it’s a well produced record as all around.

← Eleni Mandell at the Cedar
Marina V on ‘Dollhouse’ →