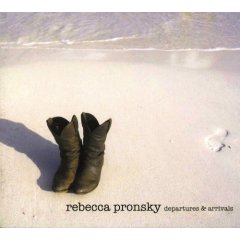 I reviewed Rebecca’s previous release, The Early Hours in 2005. Based on that, I had in my head that she was more of a jazz artist. So imagine my surprise to put this in and hear what borders on country music! I’m happy to report that she is just as skilled at this genre than at jazz. You don’t see that everyday.

These songs while having a little twang, still have enough guts not to be too country. I’d say they’re more Western than Country (remember that old line? ‘We got both kinds of music, country AND western’? that used to be funny, now it makes sense to me!)

Some songs have more twang than others. Million Days is pretty twangy, but again, it’s more like the old good country rather than the new stuff (of which I usually am not a fan).

Break Even is more of an Adult Contemporary style. It’s really fun to hear different genres on one record, but it manages to do this without sounding too schizophrenic.

I am enjoying this record even more than her last. Well done!