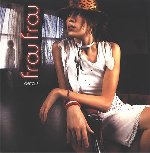 For all you Imogen Heap fans I’ve got great news! She’s back! It’s Imogen Heap in her new creation, Frou Frou. Here she teams up with Guy Sigsworth to make some wonderful songs that will fill up the empty space since Imogen’s last release “i Megaphone” in 1998.

Imogen brings back her wispy yet strong voice with its wide range and comfy feel. The songs are a combination of pop, trip-hop and ambient with catchy melodies (without being trite) and funky rhythms.

“It’s Good to be in Love” is a favorite of mine as it sounds like it would fit in very nicely on “i Megaphone”. It’s also radio friendly and if any station is not playing it, they should be.

“Must be Dreaming” also sounds very radio ready. I just know if this stuff were played Frou Frou would be hugely famous.

“Hear Me Out” could be this recording’s “Come Here Boy” which I believe made the biggest splash off of her first CD.

If you liked Imogen’s solo stuff, you’ll love this as well. If you aren’t familiar with her and you like artists like Poe, Fiona Apple and so on, then check her out. You won’t regret it.