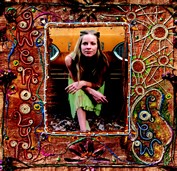 This is Gwendolyn’s (no last name) third CD and it’s filled with heartfelt, well-written songs that showcase her unique vocals.

I guess the style would be folk. But there’s more going on here than your average “girl and guitar” and I don’t mean just because there are several instruments. The songs are intricate in melody and also in rhythm. They’re interesting. They don’t necessarily go where you might expect them to and I find this very refreshing.

“Somebody Else’s Man” has a bit of a retro feel to it. Like it could be one of those great ladies of the 60s (Joni, Joan, etc)

Gwendolyn’s quirky voice and lyrics make this recording quite different from other sounds floating around out there and definitely worth a listen.

Rating: 4 Stars
Comment: Gwendolyn is fantastic! A friend bought me Joanna Newsom’s CD knowing that I like Gwendolyn. Joanna is good but Gwendolyn is amazing. Highly recommended, especially track 5: Nothing, and track 11: Insect Perspective.
email:revoile_@_aol.com
name: Charles on Saturday, January 8, 2005