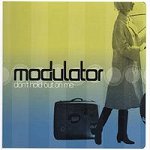 Well, here’s one example of the CD being just what I was expecting. The cover art is so appealing to me, I thought, if the music matches I’ll like it. It does, and I do.

With song titles like “You’re so Analog”, I’ve got to think that the band is at least semi-geeky. I consider myself a little geeky and I’m not even sure what that means. But I like it. The song is a little robotic in tone, and I’m sure that’s intentional. It works. I love that part of the lyrics are “One Zero, One Zero…” any geek will see the meaning of that and smile.

In “Major Malfunction” she sings, “I was never programmed to be your girl/ But a major malfunction occurred”.

“Don’t Hold Out on Me” is a little more accessible (to non-geeks) but is appealing to all.

This little EP has some nice pop hooks and catchy tunes. I just wish it were longer!

Track Listing
Listen to track samples
1. Major Malfuncton
2. You’re So Analog
3. Don’t Hold Out On Me