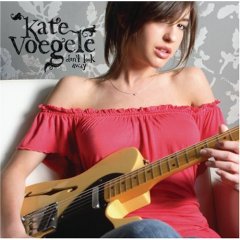 I reviewed Kate Voegele’s previous release, Louder Than Words. At the time I compared her to Michelle Branch or Anna Nalick and I can’t say I’ve changed my mind too much.

The songs are really that mainstream likable pop.

I will say that I really do like her voice. While it sounds a little like some of the other girls doing this now, hers is better. I had said before that I wanted to hear more from her but with less production. This release still is quite production heavy, though perhaps a little less than the other release.

Top of the World (no not the Carpenters song) is a really nice, radio friendly tune.

I Get It also has a twinge of blues to help her stand out from the crowd.

There’s nothing terribly new here, it could be one of a handful of young pretty girls who sing pop music. She’s talented, for sure, but how many do we need? But there is something very likable about this record. The fact that I don’t really listen to those other artists makes it easier for me to like Voegele, because to my ears she can be the only one. But for the mass market? I’m not so sure she’s enough to rise above and stand out. I hope she is, because I do like her.

Note: her previous album was available on CDBaby and no longer is, neither is her new one. This bums me out. It usually means that the artist signed with someone else who will not allow her to sell her CDs there. I see she’s on MySpace records now (are they taking over the world or what?) so I hope this is not a trend with them. I see that now her previous release is on Amazon but only for 38.00! Sheesh!!

← Album Review: Kittyhawk by Santa Dog
Athena Reich is back in the studio →