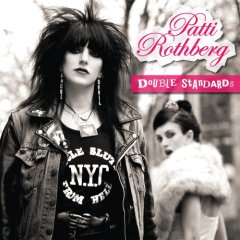 At first I was thinking the photo used on the cover was more of a gimmick, to get folks to say “THAT is Patti Rothberg?!” “or “Wow, Patti’s changed since Inside‘ because the photos inside show her much more “regular” looking. But then I realized that the woman in the background of the cover photo is also her in a completely different get-up. Get it, “double” standard?

The music hasn’t changed all that much that I can see. Maybe a little more rock, little less pop. But her music’s always been a little tuff. I reviewed her previous release, Candelabra Cadabra here in 2001 and I liked it. [read it here]. This record though seems to split the styles more distinctly from song to song: some more acoustic, some more hard rock-ish.

Inventory is a slow song, but then the guitars really wail toward the end.

She does a cover of Gigantic (originally done by The Pixies) which sounds very similar to the original. I’m not really sure why you’d cover something and keep it the same, unless you’re trying to win a karaoke contest…or American Idol. But it’s a great song so I can see why she’d want to sing it.

Wavelength is quite pretty. She takes it down a notch and there’s some nice finger picking guitar.

Someone I Love is a bit unexpected. It’s almost country-bluegrassy.

I think Eye to Eye might be my favorite. But all the songs are really pretty good and fun.

All in all a good record, if you liked her previous work, you’ll probably like this too.