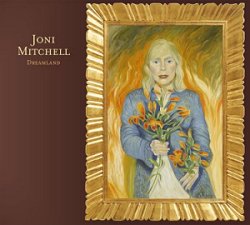 Well, I grew up in the 70s but while most kids my age had Joni Mitchell songs played through their houses, I had the Original Cast of “Guys and Dolls” and such. No, I don’t have two daddies…but I did grow up in a show business family. My parents were “in the theatre”. So pop music, though played occasionally, was not prevalent in my childhood home. So I am sort of discovering many of these great artists now.

Since this CD is a greatest hits of sorts, I was sure I’d put it on, recognize every song and say to myself, ‘Oh this is Joni Mitchell!’. Nope. Not at all.

Sure, everyone knows “Big Yellow Taxi” and “Both Sides Now” and I knew “Help Me” but there are a lot of other fabulous songs on here.

So I am hearing many of these songs as if they were written just recently. And the fact that they sound new and fresh is just a testament to Mitchell’s genius. These songs are as current today as the day they were written, or perhaps she was just ahead of her time.

Her voice is just so distinctive and incredible. Just try and sing along and hit all those notes, it’s not easy. The melodies are intricate, but pleasing and comfortable at the same time and just make you feel good.

If you are a Mitchell fan, you may already have most of these songs on other CDs, but to have them all in one place is worth it. If you are relatively new to her music, but you like folk this retrospective is a must have. A plus is that it is beautifully packaged with photos of her paintings and all the lyrics printed (apparently for the first time ever).

Stand out songs: well, it IS Joni Mitchell, so you know they’re all good, but I have a particular fondness for “Help Me”, “Amelia” and “Carey”.