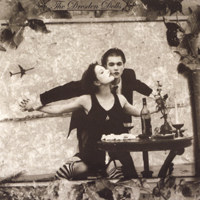 Theatrical, bizarre, weird..however you slice it Dresden Dolls are not an ordinary band. This dynamic duo of Amanda Palmer (voice, piano) and Brian Vigilone (drums) have made what is easily this years best debut. Maybe even the best record of this year.

Palmer plays the piano like a demented cabaret goddess and sings like no one else can. Viglione drums steadily and with fiery passion. They call it Brechtian punk cabaret and that’s as good a label as any.

“Girl Anachronism” is a searing tale of a deeply troubled person. Palmer pounds her keys and shouts her words like she’s afraid someone’s going to cut off the electricity any second.

“Missed Me” tells of an underage seductress (hello Lolita!) in less than healthy terms. Palmer gets under her skin like she does with her other narrators. The staccato bursts of piano frames her words perfectly.

“Coin Operated Boy” is a hit in the Bizarro universe. Palmer describes a sex aid that gives “love without complications galore”. Then the song becomes almost unbearably poignant.

“Bad Habit” is a great commentary on self-destructiveness. “Sappy songs about sex and cheating/…/makes me want to give mankind a beating” Palmer sings.

The lighter “The Jeep Song” is catchy and energetic.

“Dresden Dolls” is as great as any other work of art. As great as anything gets when it’s created with passion and guts.