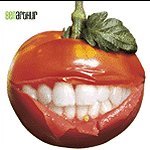 Let’s just get this out of the way…that cover art gives me the heebies. I have a weird bug-a-boo about “photos” that show things that shouldn’t have mouths, having mouths. Or those photos of dogs with people mouths…creeps me out. *shudder* Luckily, the music isn’t creepy at all.

The CD starts out with “Mary Ann” a playful lusty song about getting a tease to, ahem, follow through. I must say I am quite surprised that Bardic Records felt this song was OK while at the same time forcing label mate, Jennifer Marks to change her song about a woman getting a lap dance because they were “trying to reach the Wal-Marts and the Targets of the world”. This irks me quite a bit, but it is not Ben’s fault so I will not let it reflect on him. It’s a fun song, and I’m glad it made it on the CD.

Ben’s voice at times reminds me of John Linnell from They Might Be Giants but is not quite a nasal. Ben’s music is fun, smart pop with amazing hooks that will be playing in your head long after the CD comes out of your player. The songs range from straight up pop, to rock, to Americana and he does all those styles very well. They all seem to come very natural to him.

“Tonight” is a lovely ballad. “Broken-Hearted Smile” is the most radio friendly song I’ve heard in ages. “Instrumental #3” is ear candy for anyone who loves the sound of the guitar. But my favorite is probably “Keep Me Around”, but ask me again tomorrow, it could change. They’re all really good songs.

I can imagine nearly every song on here being played on the radio and being very well received. I think “Edible Darling” and Ben Arthur have a big future.