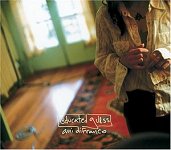 I’m going to review this CD a little differently than most. I am a die-hard Ani fan. I love her. I want to be her friend. I have learned so much from her music and spent many nights enjoying her live shows. I’ve seen her perform so many times I’ve lost count.

But I have not loved every CD release. I love the Ani who just sat there with her guitar and sang about social injustices, political issues, loving the wrong man, and fish. But she lost me when she decided she was a jazz artist and brought in all the horns. I still bought every CD, and I still attended every concert (here in Minneapolis) but let’s just say I didn’t “get” her anymore.

I did like “Evolve”, her most recent release before this one. But that was the first in awhile. I still don’t like it enough to listen to it on a regular basis. But many of her CDs grow on me. I put them in and immediately think, ‘eh, it’s Ani all right’ then it sits on the shelf for a while until I give it another chance. At that point I usually like it more. By the third or fourth trip down from the shelf it’s my favorite record and I can’t stop playing it. So I’m going to write this review in an on-going fashion:

January 23, 2004: I am currently on track 9 of my first listen to this CD, which arrived in my mailbox yesterday. My first impression is…yep, that’s Ani. There is still a little leftover jazz rolling around here, but it’s much more stripped down. This track, “Animal” is really nice. It’s not as “full” as some of the others.

One thing I can say I don’t care for is the way she still tries to still use those horns by mimicking them with her background vocals. I mean, it’s amazing that she can do that; I’m impressed…I just don’t like the sound.

The overall feel is of discord…dissonance. Which I usually like, but upon first listen I’m going to say it’s over done and makes this not very accessible to those who won’t try. But from what I know about Ani that’s probably exactly what she is going for. If you won’t try, then she isn’t making this music for you. I may be off base, but I gather she doesn’t give a crap if you like it or not. I admire that. More after I hear it again…I am going to see her perform tonight so check back for a review of the concert as well.