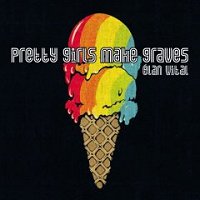 Pretty Girls Make Graves formed in Seattle in 2001. They released their debut “Good Health” in 2002, but their big break came in the form of the record “The New Romance” released in 2003. The incredibly catchy guitar riffs mixed with the very energetic vocals of Andrea Zollo made for a wonderful album, and it became one of my favourite records of 2003 with ease.

Three years later, they are back. There have been some changes in the line-up, most notably the departure of their second guitarist, and as a replacement they added Leona Marrs on keyboards. And this replacement doesn’t go unnoticed; the entire record has a more electronic feel to it. The high-pitched, quick guitars are all gone except for one song (Selling the wind). That is not to say that the guitars in general aren’t present, but they aren’t as dominant as they were on its predecessor. The keyboard is featured notably on several tracks on the album; especially Pictures Of Night Scene and Pyrite Pedestal. These are also the two most outstanding tracks of the album. Their melody is very clever, and incredibly catchy. That, combined with the urgent vocals of Andrea showcase Pretty Girls Make Graves at their very best. Their upbeat songs sounded kind of like teen-punk songs on The New Romance, but with the keyboard as a leading instrument they sound a lot more mature.

The keyboard doesn’t just serve as an instrument to get everyone on their feet. Songs like Pearls On A Plate sound very nostalgic. The ending is played on a cello, and the sound of what seems to be distant fireworks going off give it a very nostalgic feeling. The feeling you get when you crawl into bed after a long and cold night of champagne and fireworks, and you realize that tomorrow things will start to become normal and the same again . The way they put such a feeling into this song works really well.

Parade is song that really stands out. The vocals are very catchy, but the lack of guitars is what really draws your attention. Andreas vocals are great in drawing your attention like that. The song itself is similar to a 50s feminist strike, with lyrics such as “We’re throwing down our bush brooms / We’re hanging up our apron tights / We’re coming from the back roads / Out of the fields and the factory lines”

All in all, this is a pretty different album compared to its predecessor. And although less guitar generally means less catchy hooks, they filled it up very nicely with the keyboard. But the band is best at playing up-tempo songs. Ballads, such as Bullet Charm, don’t work well as neither Andreas voice nor the music carries enough emotional weight to pull it off successfully.