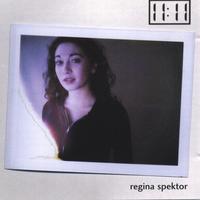 I first heard of Regina Spektor when Anna Maria Stjarnell did a review of her CD, “Songs” for this site. It intrigued me so I went to CD Baby to listen for myself. My first thought was ‘this girl is odd’ my next was that I wanted to hear more. At that time her CD “Songs” was sold out but I saw that she had another CD, this one, “11:11” so I snapped it up. Upon first listen it grabbed me and I’ve been listening to it almost non-stop since.

Regina is really hard to describe. She’s jazz, blues, pop, rock and I don’t know what else. Her voice is clear and strong and gutsy. It swoops, soars and screams. The songs are well written, funky, catchy and impossible to get out of your head.

From the first few piano notes of “Love Affair” you are hooked. The simple production really works for her. It’s raw, emotional and you can hear every little bit of her music and her vocals.

The CD continues with strong percussion whether it is bass or drums and her amazing voice with its large range.

“Marry Ann” is consists of the slapping of a stand up bass and her jazzy vocals She sings of porcupine love (“so stiff and stuck and prickly/he came in and then back out quickly”) then Marry Ann’s her thoughts of murder (“Ms Marry Ann preferred her meat to be freshly butchered/oh she killed him rather quickly man that woman was truly sickly”). It’s a great track that ends in a sneeze. (sounds weird, I know, but you’ve got to hear it).

“Pavlov’s daughter” is a work of art. She scats, she soars, she sighs. It’s got several movements that a lesser songwriter might have made into a bunch of different songs but Spektor puts them all together to make one incredible piece.

“Braille” is a beautiful piano ballad.

“I Want to Sing” is an a capella piece that showcases her jazzy vocal abilities.

If you’re looking for something completely different and fabulous, check out Regina Spektor.