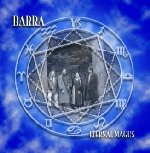 Please note: this review has been altered from it’s original form per request from the artist and former label

Barra were formed in the 1980s but due to unfortunate circumstances their album hasn’t been released until now.

The lovely singing and good melody of “Gnosis” make it a standout in every respect. “Green Man” is a powerful song that must have sounded even better live.

“Seafever” is a melancholy song with plaintive-sounding guitars and an oddly delivered but effective vocal.

“Silverman” is a hard song with a frantic pace and soaring vocals. This record is a great find.