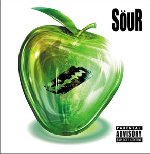 Album Name: Exactly what You Think it Is
Artist: SöuR
Year/Label: 2003 / Independent

Wow, this is quite a bit harder than the stuff I’m used to. I’ve been listening to a lot of “girl and guitar” or “girl and piano” so this is a little bit of a shock to the system, but I like it.

Sativa’s voice is a great match for this aggressive, hard, punkish, almost metal, music. The guitars punch and wail and the drums will feel like they’re changing your heartbeat.

Stand out songs for me are “High Strung” (which has a video that you can se eon their site) and “Amber Glow” which starts off the CD and has a great techno twinge to it.

For thos of you tired of folk, pop and lite rock this is the CD for you.

← Interview: Gabriela Kulka
Album Review: From the Inside by Triangle Park →