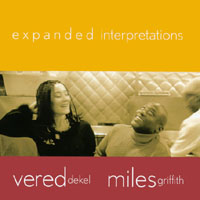 Well, this is a first for me. This CD is the first (and only so far) one I’ve received from Israel. This is also the oddest by far. I mean that in a good way. I played it for someone else and said, “What is this?” “It’s jazz” was the response. Now I’ve heard jazz before, I’m not well versed in it, but I have heard it. And I’m pretty sure it didn’t feature snoring, giggling, kissy noises and raspberries. But this is pretty cool!

The CD begins with a man snoring and a woman trying to wake him up. Then it goes into an intricate song with lots of scatting and swooping.

On “Boola ZooLA” you can really tell that Vered Dekel has an amazing voice. She also cuts loose on “Emp-Va-Lest ” showing her almost operatic prowess. And Miles voice? Velvety, sexy and enveloping.

The musicianship on the recoding is incredible. From the horns and electric bass to the piano, drums this is really fun. There is classic jazz, spoken word and calypso.

I know I’ve said this in reference to CDs before, but if you are looking for something really different this is your ticket.

Rating: 3 Stars
Comment: Well, it’s different. Great musicianship I agree but the credit as far as I’m concerned for that should go to Mr. Griffith. Vered’s voice in my opinion is NOT a jazz voice. She is unique and very gifted because she composed and wrote most of the tunes but I’m sorry to say, I just don’t dig her sound. The only standard on the album “Willow Weep for Me” is my favorite and Miles did a bang up job on it however I would’ve liked to have heard another female vocalist singing opposite of him…perhaps someone with a more richer and deeper tone. At some point, Vered’s voice just sounds grating almost like listening to nails screetching down a black board! When I played it for someone, they asked me to turn it off. This is defiantly a musician’s CD because only another musician could ever truly appreciate how very talented these two are to pull off something so…humm…well…odd. All in all, I liked the album and keep it close to my CD player. I’m looking forward to hearing more from Miles and hopefully Vered will get it together…she has promise. But please…stop billing her as Jazz…she is NOT a Jazz singer and the album is NOT Jazz thank you very much. A Jazz vocalist
name: Lisa T. on Thursday, September 29, 2005

Ed. Note: I have to disagree that this is a musican’s album as I am not a musician and I enjoyed it. Yes, it is odd, that’s clear. And though it may not be standard or old school jazz (and maybe you are) I still think some of it qualifies, but see, I also said it was a mix of other genres. Never did I say this was a strict jazz cd. I liked her voice. *shrug* but it’s not a CD that I listen to with any regularlity here, two years later.