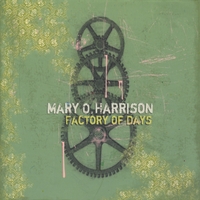 Mary O’Harrison was formerly in a band called Charm School, but this is her debut album as a solo artist.

There are parts of this album that I really like and songs I would have left off had I been the producer.
Let’s focus on the positive because that’s the mood I am in today.

Her voice: Sweet, almost girl-ish but not cloying, as some girly voices can be. It fits the music nicely.

Where is Charlotte Anne? Is one of the ones that stands out to me. It’s got an easy melody and good piano.

Way of Walking is an up tempo toe-tapper.

Last December is very pretty, it’s stopped me a couple of times now while in shuffle rotation. It’s probably my favorite. I like the use of minor notes. I also have a fondness for Orange Blossom.

Better Day has a nice melody. A little unexpected (as in, not predictable).

This is a sweet album. I don’t know why that word seems to fit, but for me it does. Maybe it’s her voice. But I like it.