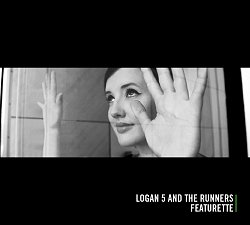 Review by Anna Maria Stjärnell
Logan 5 and the Runners are named after a science fiction film starring Michael Yorke.

They profess to having Pulp and David Bowie as influences, and that is apt.

Girl of the Internet sees lead singer David Berndt pulling a few tricks from Jarvis Cocker’s book as the band play a catchy and elastic tune.

TV sounds spunkier and leaner, with the guitars set to stun. Shades of the Sparks arty mayhem are apparent.

Passing the Time approaches both epic grandeur and disco dancing as Berndt croons like a star. It’s like a distant cousin of some seventies Roxy Music song updated for today.

Someday throbs darkly with synths, as it becomes a lush, sumptuous song with a real sense of drama.

Logan 5 and the Runners seem like real contenders with this great album.

[Logan 5 and the Runners Official Site]